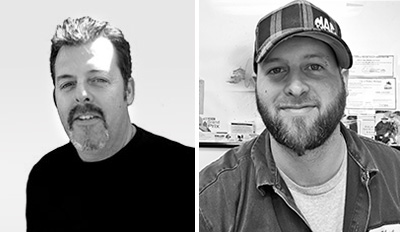 Butch Kasnowicz has been working on cars and trucks since he was knee-high to a crescent wrench, getting his first taste of auto mechanics before he was even a teen. And with upwards of a dozen men and boys in the extended Kasnowicz family involved in one way or another with autos, you might say it runs in his genes.

One of those men is Butch’s son Phil, who’s now an official partner in the business, and primed to assume the driver’s seat when Butch is ready to relinquish the keys. Which Butch promises won’t be soon!

Phil represents the third generation of Kasnowiczes to work in auto mechanics, starting with Butch’s father, who ran an Amoco station on Grand Rapids’ West Side decades ago.

That’s where Butch cut his teeth – and more than a few knuckles – working a steady shift from 7 a.m. until dark the summer following 8th grade.

In ensuing years, he’d stick around the shop so he could build monster trucks and then run them over the sand dunes at Silver Lake.

He started “Butch’s Complete Car Care” at the Alpine Avenue address where for 30 years and running, he’s served his hometown community. In all that time, Kasnowicz has been a firm believer in delivering first-rate service, and at a competitive price not influenced by what he terms “fancy showrooms and kiddie playgrounds like you’ll find at dealerships.”

Butch’s has been known to go the extra mile as well, in picking up and delivering work to their clients. It makes for long hours, but it also makes for satisfied customers, and word-of-mouth testimony that can’t be bought.

“I figure that in another 100 years, I’m gonna give it up,” he says, “but in the meantime, I’m going to continue to service the people in my community, just like I’ve been doing since 1972. And I’m proud to have my son Phil at my side, ensuring that the business I started will continue on in the same fine tradition.

WHAT SETS US APART:

REPAIRS DONE RIGHT
If it’s not broke, we’re not going to fix it. When it is broke, you can have the confidence that it will be fixed right.

MONEY IN YOUR WALLET
We don’t have the overhead that big dealerships have, yet we have the technology and experience you need at a price you can afford.

LONGEVITY
We’ve been servicing the community since 1972, and plan to serve you well into the future.

INTEGRITY
Our character is everything. So we never make promises we can’t keep. And we’ve always been more than just a shop. We pride ourselves on building relationships. That’s the cornerstone of any successful business.

At Butch’s we take every one of our customers very seriously. In exchange, we hear back about how we’re appreciated. And that makes our day.

Just a few weeks ago, we helped a gentleman whose wife had just purchased a van that was supposed to accommodate her wheelchair. It had some serious defects, so we took it upon ourselves to contact the dealer, saving the couple additional tears and hassles. The dealer made it right, and today, that couple is driving the way that van was meant to be driven – safely. Every time we see that couple, they express their gratitude. But to us, we’re just doing our job.

Here are a couple of letters from other satisfied customers:

“Butch – Thank you so much for doing such a fabulous job on my car. You and your crew exceeded my expectations. I could not be happier with your service.”
– Julie.

“Hi Butch! Thank you for your help in selling my car. I really, really appreciate what you did for me.
– Ralph.

PRIORITY IN THE GARAGE.

Your vehicle makes you money… Unless it’s not running. We know this and want to get you in and out ASAP.

If it’s not broke, we’re not going to fix it. When it is broke, you can have the confidence that it will be fixed right.

MONEY IN YOUR WALLET.

We don’t have the overhead that big dealerships have, yet we have the technology and experience you need at a price you can afford.

Every time we service your vehicle, we will inspect it and make you aware of any upcoming issues to watch out for.

Thank you! I have received your message.